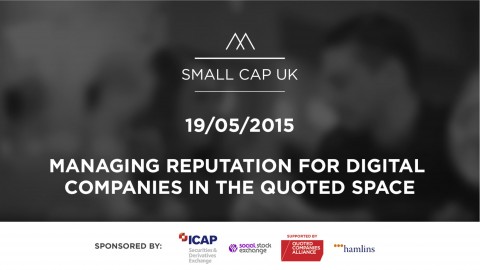 The Small Cap UK club hosted an event this month for those wanting to learn more about protecting reputation in the digital space. The event was chaired by Tim Ward from the Quoted Companies Alliance (QCA). Tim was joined by legal expert Christopher Hutchings from Hamlins LLP and public relations expert Jonathan Jordan from Sermelo. Their respective presentations reflected the way PRs and legals combined can often create a dream team for those looking for support in what is often described as the ‘wild west’ world of blogospheres and bulletin boards.

The event aptly took place on the day that Thomas Cook’s mishandling of the Corfu carbon monoxide poisoning climaxed. Tim Ward kicked off with a summary of the QCA’s Issue 12 of the Small and Mid-Cap Sentiment Index findings which discovered that 65 per cent of companies that experienced a rumour or allegation on the Internet ignored it.

The Internet has created both an immediate and more complex world for public companies and Chris and Jonathan offered some navigational tools for those that found themselves dealing with rumours and allegations.

It was emphasised by Jonathan that being pre-emptive was the first approach any company should take. He strongly recommended that stakeholders should be identified in advance as part of any good corporate governance procedure.

“Corporate allegations or rumours can be likened to toothpaste. Once out of the tube they are hard to get back in and have a tendency to make a mess,” said Jonathan. Therefore it was important to line up stakeholders, disseminators and your audience in preparation for any potential allegations.

Jonathan encouraged quick monitoring if there was a rumour or allegation that began and in this respect he was talking in a matter of hours or days rather than over a period of weeks. He then recommended engaging quickly with priority audiences to let them know that you are aware of the allegations – often called a ‘holding statement’.

You can make the connectivity of the digital world work to your advantage but he stressed whatever your response is, it should be simple, clear and consistent referring to the KISS acronym (“Keep it Simple Stupid”). Most importantly, take control of the story and don’t stop communicating. Try and continue also putting out your ‘business as usual’ messages so you can keep the allegations in perspective and make sure they drop down in the search engines. This also shows you are carrying on.

Chris Hutchings said the legal approach should be to work with people like Jonathan at Sermelo. Most of the legal side of responding to allegations is not issuing proceedings but working with the parties involved to get the material removed without having to resort to litigation.

“The first tweet took place just under 10 years ago and since that the law has been trying to keep up. A lot of people think it’s a helpless situation to try and control your reputation online but that is a misconception.”

Chris’s pointed out that not responding was invariably the worst thing to do. He emphasised no matter how heated the allegations, to make sure your response is not argumentative but to be seen to be reasonable at all times and to try and take the communication offline by providing an alternative email address.

“The legal underpinning is that there is an increasing appetite on part of the authorities to manage reputational damage online. If the abuse is beyond what is reasonable then you can also considering raising this with the police.”

He pointed out that often the abuse or rumour comes from behind a smokescreen and can ostensibly be anonymous. People think because they can hide their identity they can be abusive without impunity but regulations exist where you can write to the internet service provider (ISP) and it gives them the opportunity to avoid any legal liability. Often this method is very effective. The ISPs have 48 hours to deal with it so results can be quick. If you can’t attack the troll, attack the ISP or website.

Chris cited one example of a client facing abuse and they managed to get an Order against the search engine to release the IP address of the anonymous abuser. They also publicised the fact the Order had been made to great effect.

The main piece of advice was that ignoring a problem was probably the worst approach, which was contrary to the QCA’s findings that this was in fact what most people did. If you are not communicating things can get worse. Line up good processes internally of who the key communicators are within your organisation before the rumours ever take place and you will be in a position to deliver the message clearly from one source while you continue business as usual. You need to engage with people and listen and say you are open to meetings.

In this respect as part of company policy (just as important for small businesses as well as large) make sure you create a protocol for information control and never write internal communications you would not want published. You can keep staff informed but you don’t necessarily want them responding to the allegations in an uncontrolled way, so set out a company policy that is clear, and as mentioned appoint one person who acts as the hub for all communications around the allegation. Likewise with staff put a social media policy in place. It can be a document or an email but make sure you communicate it.

Finally remember your audience is not the person attacking you. This highlights the importance of appearing reasonable, mature and clear in your message so that you can earn respect and understanding from the people that matter to your business or to you. Trust is a function of behaviour and if you give the notion that you have acknowledged the allegations and are moving on towards better behaviour, often that is all your audience needs to hear.